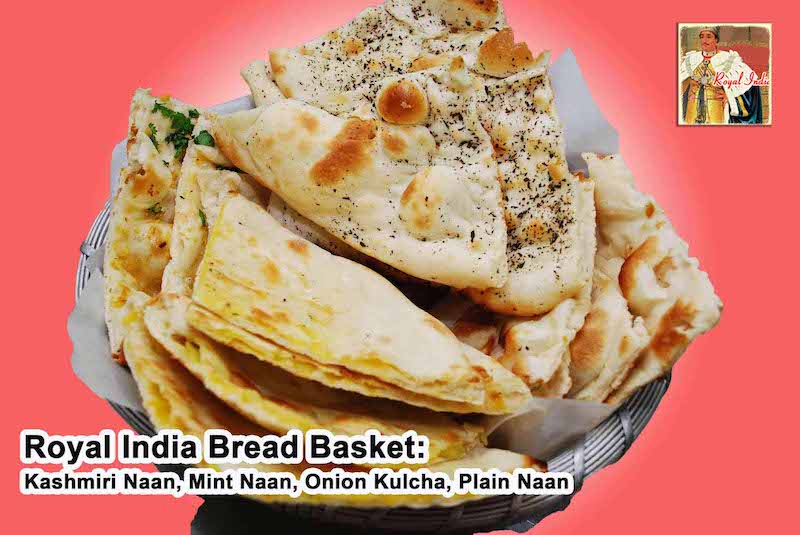 Comments Off on Breads Offered by Royal India Restaurant in Raleigh, NC

Using unleavened or leavened dough, breads are either fried or cooked on a griddle (tava), or baked in the clay ovens (tandoor). Different regions have introduced their own ingredients and style of baking breads, creating several types and variations served throughout the region.

Chapati, Naan, Paratha and Kulcha are some of the popular varieties of Indian breads. Do you know, literature and scripts as old as 1600 AD describe Roti/Chapati, Naan, and Paratha we eat today?

Royalindiannc.com offers delivery options of Indian food including assorted variety of Indian breads, in Raleigh using UberEats, PostMates, GrubHub, & other services. You can also order our food online from our entire menu and pick up from our #restaurant.

Royal India offers gluten-free options in the form of Missi Roti. This bread does not use wheat-flour, instead, it is prepared from gram flour. In addition, almost the entire vegetarian menu is available in vegan options that do not use animal products.

We are excited to offer 13 lunch specials daily. These specials offer combinations of some of the most popular veg, vegan and non-veg dishes offered by Royal India. Each lunch special platter has generous portion sizes and is offered for an amazing price.

We offer convenience of ordering food from home or work using Clover’s secure system and pick food from our restaurant in 20-30 minutes. You have an option to choose mild, medium or hot seasoning options. We also offer curbside pick-up.

Why Naan Breads Taste So Good?

Royal India has gained popularity because we prepare Indian breads, and many veg and non-veg foods in clay-based, charcoal-fueled Tandoor oven. Many Indian foods, including naan breads, tandoori meats, grilled veggies have been perfected in tandoor oven!

Royal India has been serving the Triangle area since 1990 when we launched our restaurant off Capital Blvd in Raleigh. Since then, many new South Asian Indian restaurants have been launched, yet we have retained many of our oldest patrons and constantly welcome new patrons.

Royal India has been serving the Triangle since 1990 when we launched our restaurant in Raleigh. Since then, many new South Asian Indian restaurants have been launched. We have retained many of our oldest patrons and constantly welcome new patrons who seek tasty Indian food!

Naan is a leavened, baked flatbread found in the cuisines of Western Asia, South Asia & the Caribbean. Naan in Persian means bread. This soft, spongy leavened bread came to India from Central Asia & became an inseparable part of Mughlai food. It is baked in tandoor (clay oven).

Chapati or roti is an unleavened flatbread originating from the Indian. The word chapat means “slap” or “flat” which is the traditional method of forming rounds of thin dough by slapping the dough between the wetted palms of the hands. The dough is made of whole-wheat flour.

Paratha is the most popular unleavened flatbread native to the Indian subcontinent. Paratha is an amalgamation of the words parat & atta, which means “layers of cooked dough”.  A perfect Paratha is the one which separates into different layers & can be made in several ways.

Kulcha is leavened bread eaten in South Asia. It is a Punjabi variation of Naan & is made with or without stuffing. Kulcha is made from wheat flour, water, a pinch of salt & a leavening agent, mixed together by hand to make very tight dough. As Naan it is also baked in tandoor.

“The bread of happy occasions”, Puri is unleavened and made with whole-wheat dough and is deep fried.  Puffed up like a somewhat deflated ball, the perfect Puri is light golden in color. Its dough is made with whole wheat flour, water, salt, and oil.

What is in Royal India’s Assorted Bread Basket

Royalindiannc.com offers a bread basket that allows an opportunity to taste different types of Indian breads. The breads included in the basket are Onion Kulcha, Pudina (mint) Paratha, Simple Naan and Kashmiri Naan, served with or without other dishes.

Pudina Paratha is a fried unleavened bread made from whole wheat dough and topped with freshly cut mint leaves. The Paratha can be enjoyed with any gravy in our menu or can be taken with a side of yogurt and a sip of Lassi beverage or Chai.